A few weeks ago I had the opportunity to take an evening cruise on an authentic tall ship. The Lady Washington and her companion, the Hawaiian Chieftain, were spending the weekend in Blaine Harbor. Both of these ships are owned by the Grays Harbor Historical Society, in Aberdeen Washington. Throughout most of the year they cruise to ports in Washington and Oregon, and down to California in the fall. When both are in a port at the same time they offer an afternoon mock battle cruise and then an evening sunset cruise.

The Lady Washington is a replica of the original eighteenth century ship. She was the first American vessel to make landfall on the west coast of North America. Her smaller companion, the Hawaiian Chieftain, was built in 1988 for cargo trade in the Hawaiian Islands. Fans of the Pirates of the Carribean movies may recognize the Lady Washington as the ship featured in The Curse of the Black Pearl.

I’m a great fan of historical sailing ships. During my youth one of my hobbies was building scale models of various eighteenth and nineteenth century ships. Back then I could rattle off the names and function of all the sails and rigging. So I took advantage of their visit to Blaine Harbor and bought a ticket for the evening sunset cruise. Of course my other motivation was to make some photos of the ships at sail in the evening light.

Most folks on the evening cruise that day chose to sail on the Lady Washington. That was also my first choice since it is the bigger and more dramatic looking of the two. However, since I was out to make some photos, I chose the Hawaiian Chieftain. That way I could photograph the Lady Washington at sail. My choice in vessels was perfect, as we set out to sail the Lady Washington was out in front with a beautiful golden sky as a backdrop. Even the crew took time to grab their cameras!

The cruise went on for about three hours out in Semiahmoo Bay, and I was able to make many photos in the changing light. Some of the most notable were of the Lady Washington with Mount Baker as a backdrop. However, the only disappointment was the lack of wind. There was only an occasional slight breeze to fill the sails and push us on at 1.5 knots per hour.

If you would like to know more about the ships and their schedule please check out the Grays Harbor Historical Society website. I hope you enjoy these photos, I’ll definitely be adding more the next time these ships are in port! 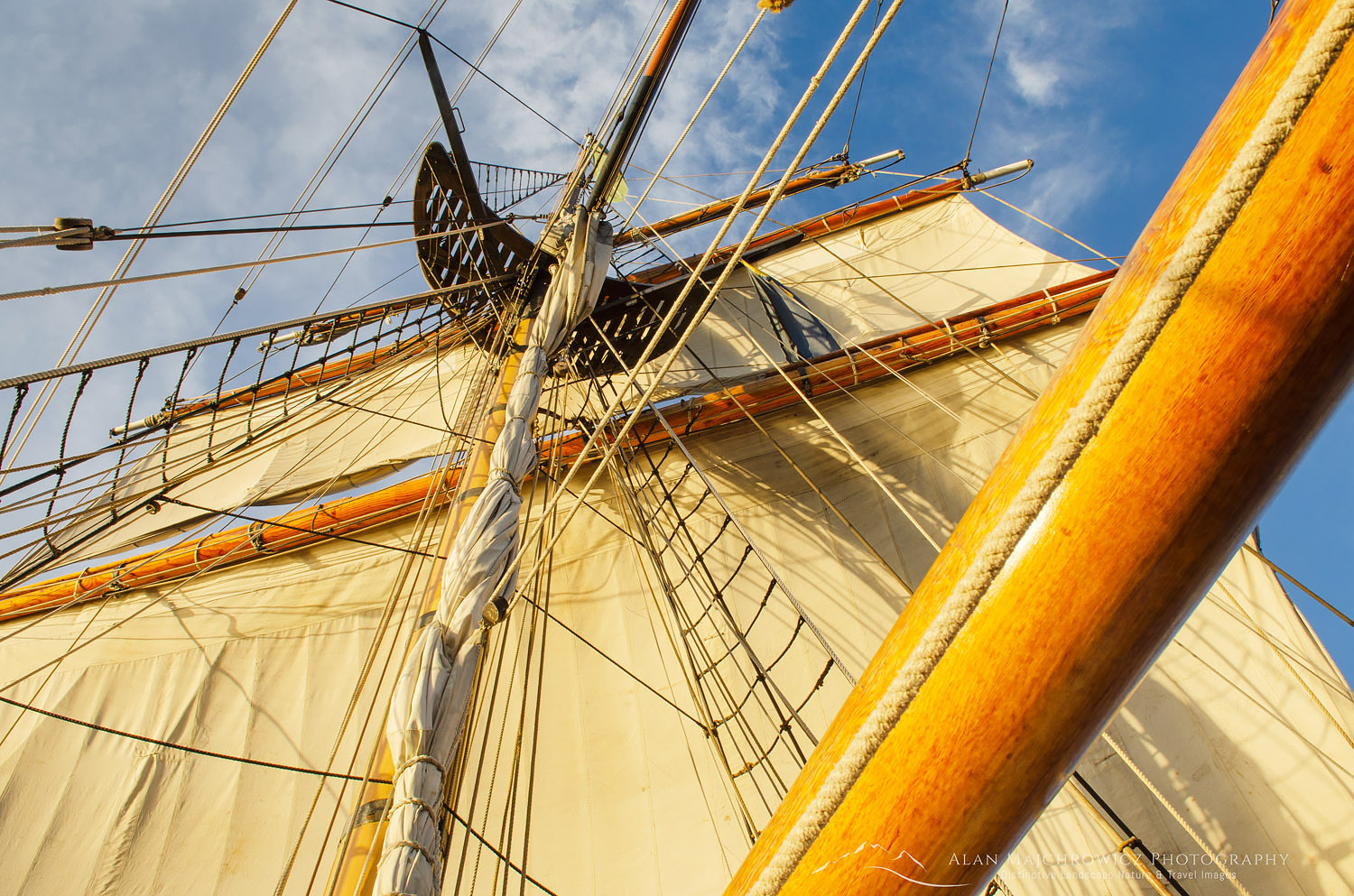 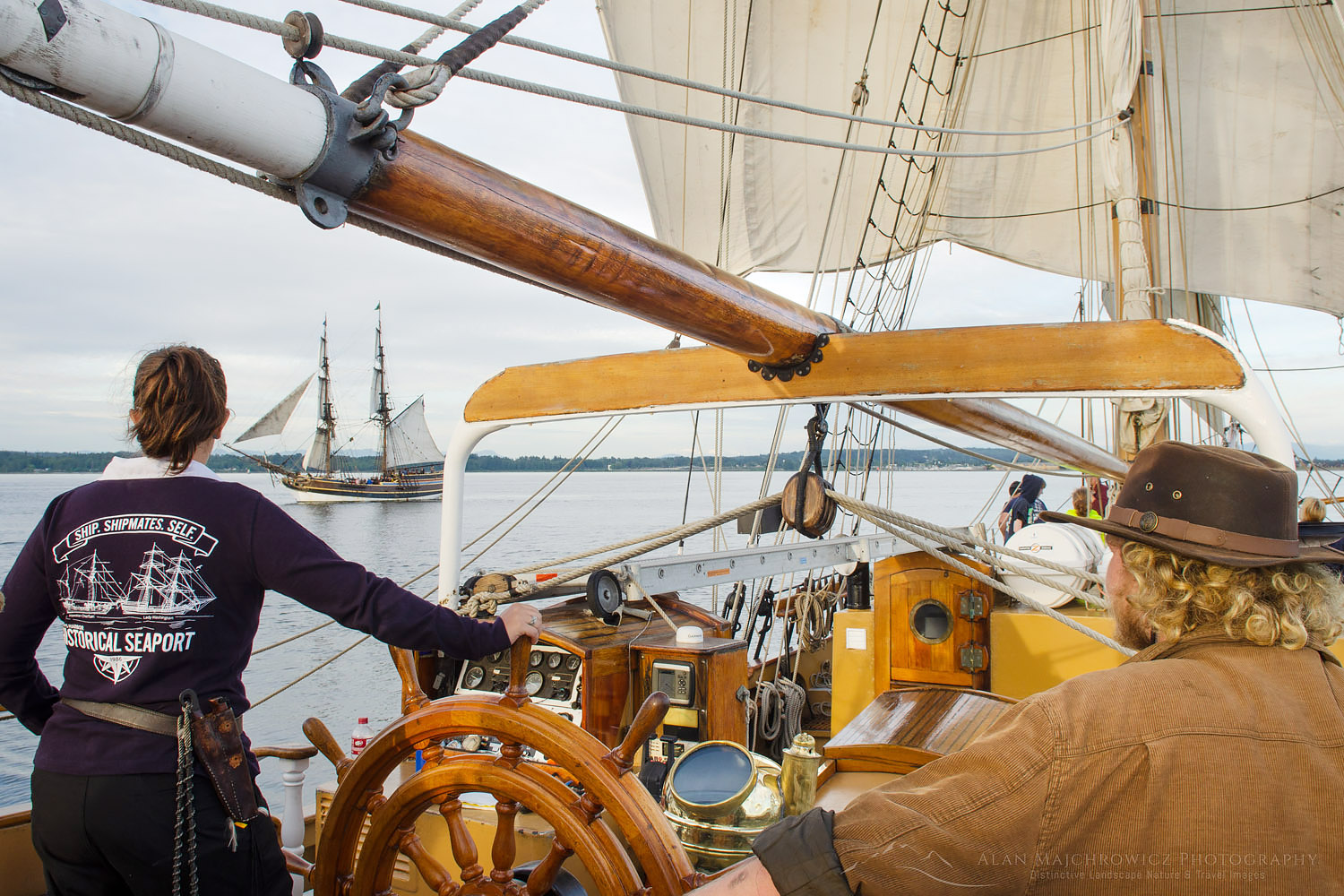 Sailing on the Hawaiian Chieftain   #62515  Purchase 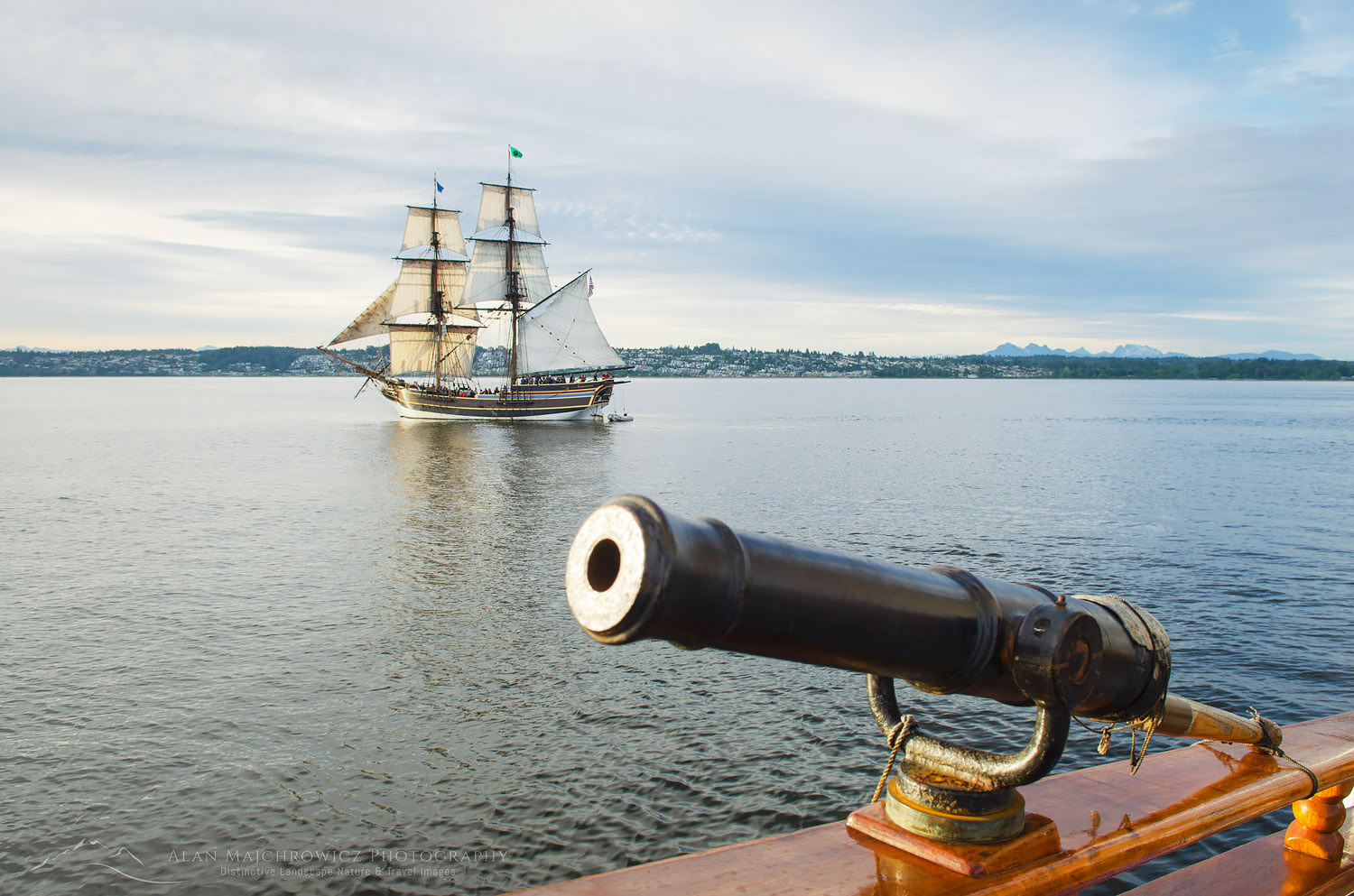 Summer is nearly over, and now that we’re in that exciting pause before the coming fall season I have some time to catch up on a few posts I’ve been too busy to work on. If you’ve been following my updates you’ll know that most of the height of  summer was spent close to home. Specifically the Mount Baker Wilderness of the North Cascades. Fortunately for me this wilderness is only an hour or two drive from my home. Practically in my backyard. During the month of August I photographed the following areas accessed via the Mount Baker Highway: 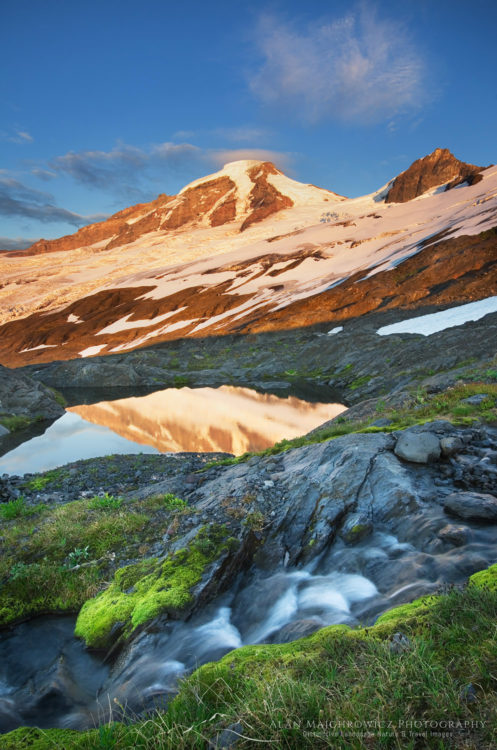 During the last week of August I was hoping to visit one more spot that might offer good displays of wildflowers. I almost forgot about Heliotrope Ridge. It has been around twelve years since my last visit. And it’s been twenty since I taught a weekend photography workshop there through the North Cascades Institute.

Heliotrope Ridge trail is extremely popular due to the easy and close access to views of the sprawling Coleman Glacier. And also because it is the start to one of the main climbing routes to the summit of Baker. Since I’ve been there before I knew that the best wildflower meadows were up high near the edge of the glaciers and snowfields. I also knew that I would have the place to myself if I went during the week. Sure enough during my three nights on the ridge I saw only one other person wandering around. The few climbing parties that set up camp stuck to the glaciers with eyes on the summit.

The wildflowers of Heliotrope Ridge were markedly different from those on the hikes to Skyline Divide and Hannegan Peak. There I came across fields mainly of valerian, lupine, corn lilies, and heather, but on Heliotrope there was a greater variety of flowers with an emphasis on yellow arnicas. Also since this area is so close to Mount Baker it receives much more snow, therefore the plants had just escaped the confines of winter and began blooming in late August while other subalpine ridges in the area were already well past peak and had gone to seed.

Another thing to do aside from gawking at the views and wildflowers is to wander cross country, there are no trails at this point. Going west along increasingly barren slopes of mixed volcanic rock and crumbly slate there are numerous rushing snowmelt streams. If you are prepared for steep snowfield/glacier travel then continue higher up to the actual crest of Heliotrope Ridge. Here the ridge consists of a wild display volcanic cinders jagged blocks of andesite and lava bombs, looking like it just cooled yesterday. Even better though is the view from the ridge of seldom seen Thunder Glacier and basin below Colfax and Lincoln Peaks, this is truly a wild and lonesome area of Mount Baker! 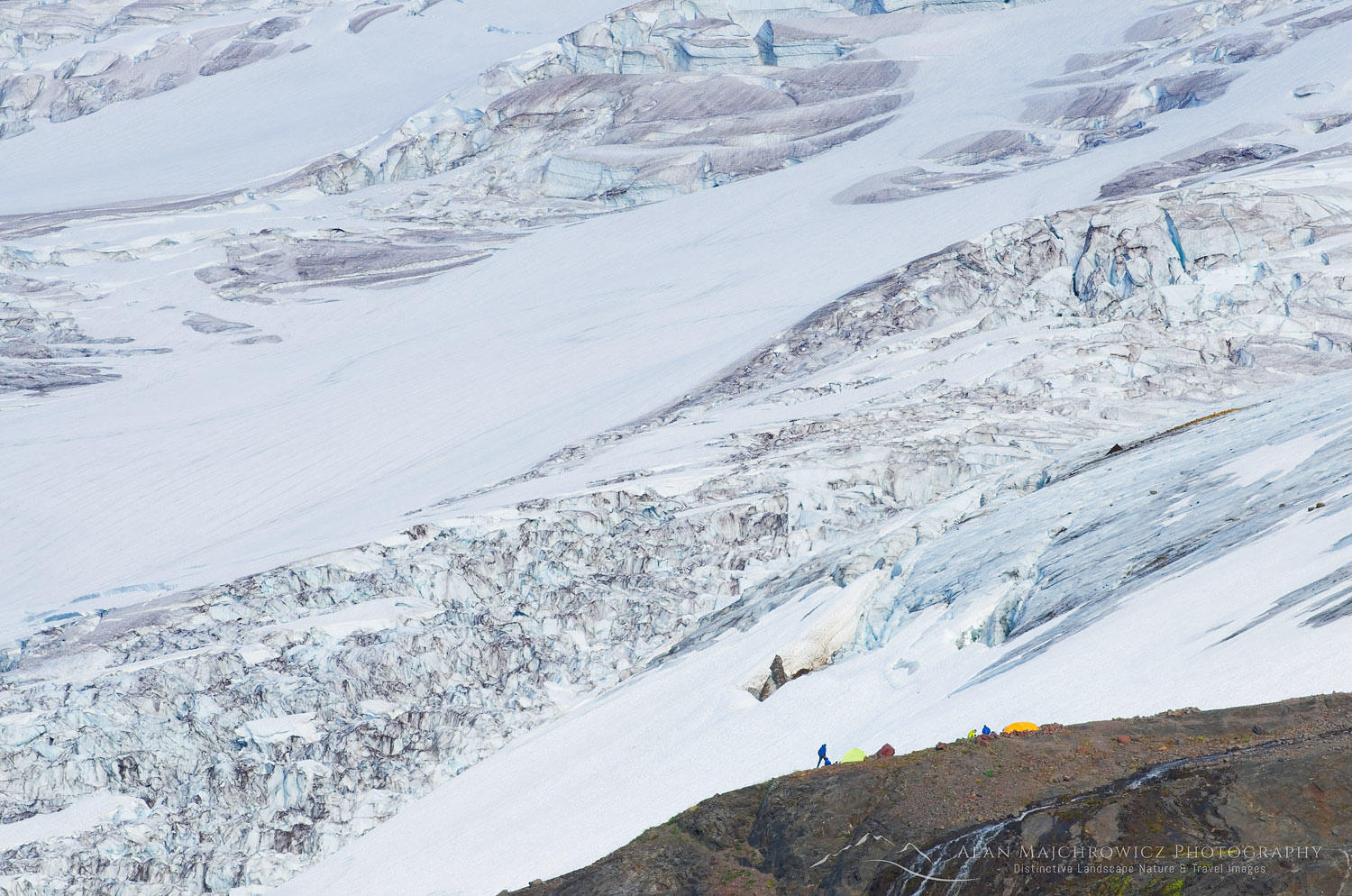 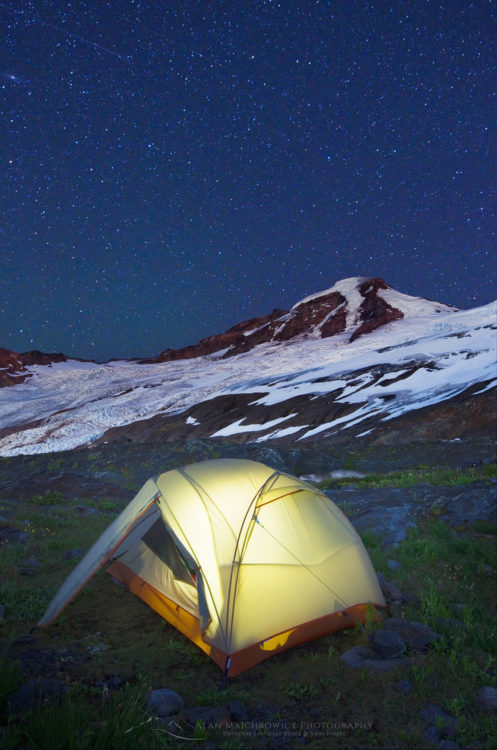