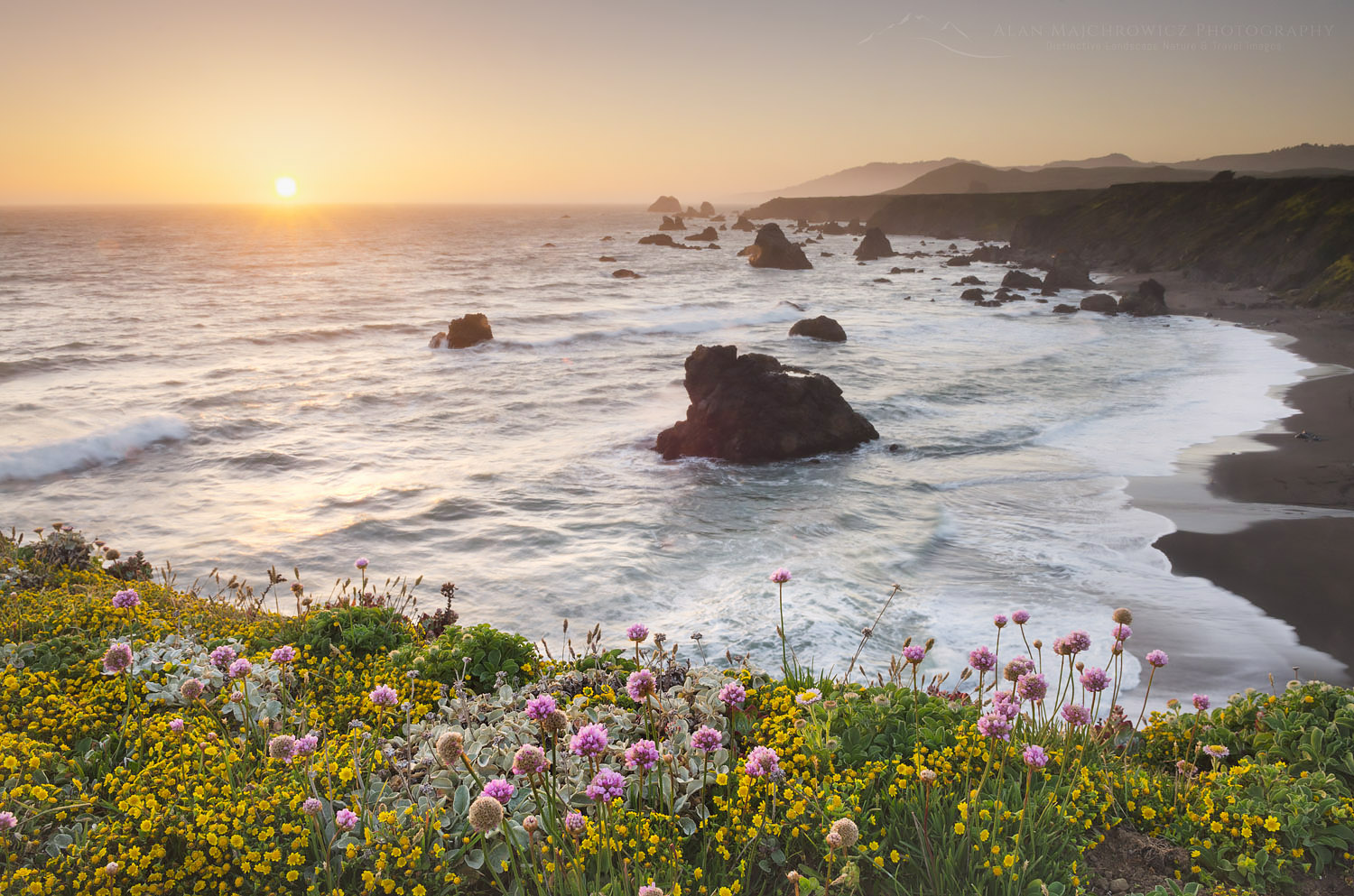 California’s Sonoma Coast stretches roughly from Bodega Bay in the south to Mendocino County line in the north. In this post I will feature areas of Sonoma Coast State Park, a highly scenic and popular area to the north of Bodega bay. This was my second visit to the area, and the first in which I was able to take time to appreciate and photograph the scenery. Visiting in the spring I wanted to take advantage of plentiful wildflowers along the coastal bluffs, and the greenery of surrounding hills. Although visiting during spring I avoided persistent coastal fog there were constant winds instead. 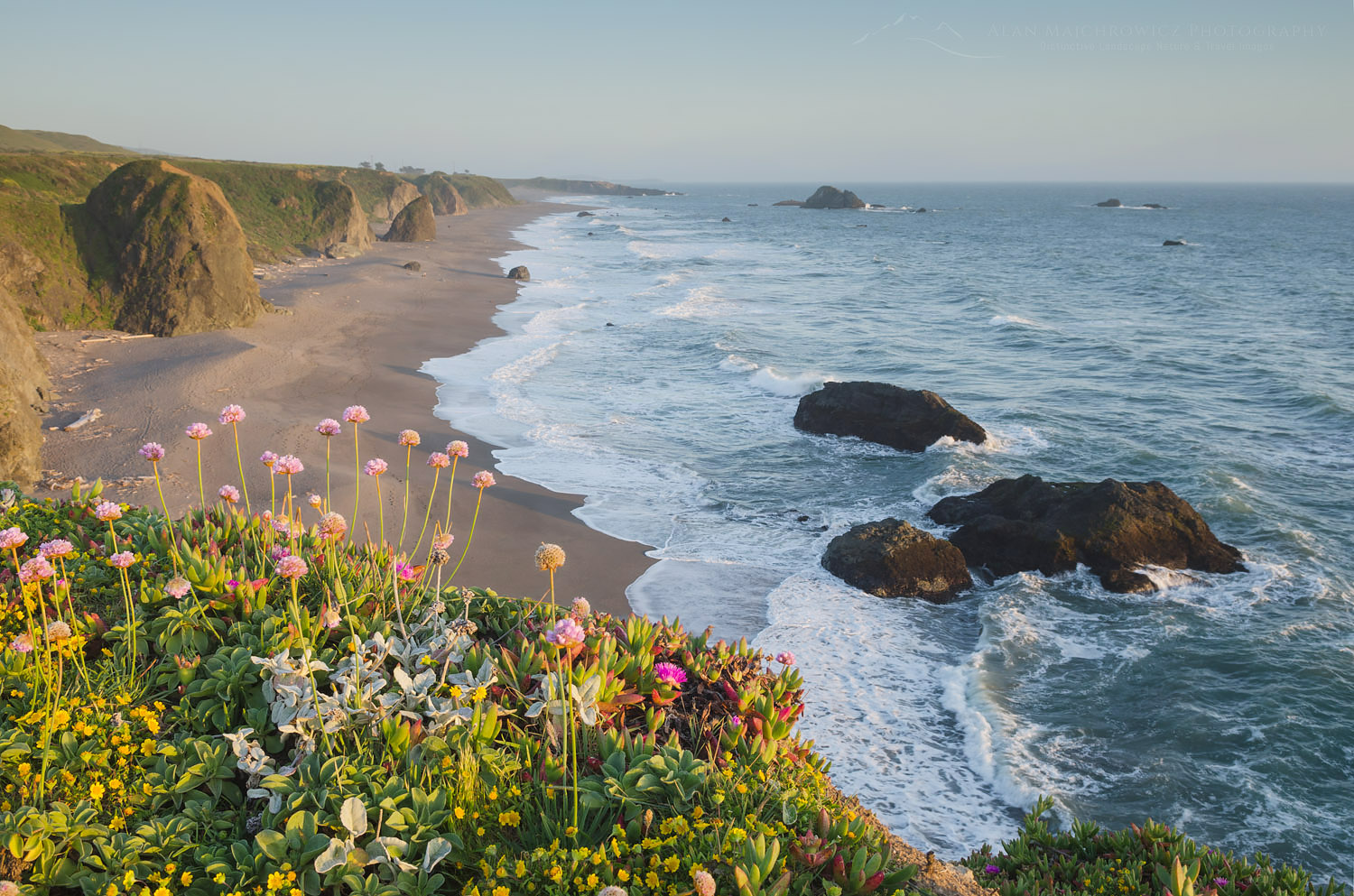 Iconic California Highway 1 runs the entire length, with numerous places to pull off for enjoying the view. The most dramatic view can be had just north of the state park. Here the highway switchbacks high up a headland. The entire coast all the way to Point Reyes is visible from this point. Sonoma Coast State Park is comprised of several scenic sand beaches and rugged headlands. Being a close drive to San Francisco the park sees a large number of visitors from the metropolitan area. Bodega Bay, being the hub for all the activities, also has the claim to fame for having Alfred Hitchcock’s The Birds filmed there. I couldn’t identify any of the set locations on my visit though. I was too preoccupied with delicious Oyster Po Boy sandwiches from Fisherman’s Cove a local seafood venue. 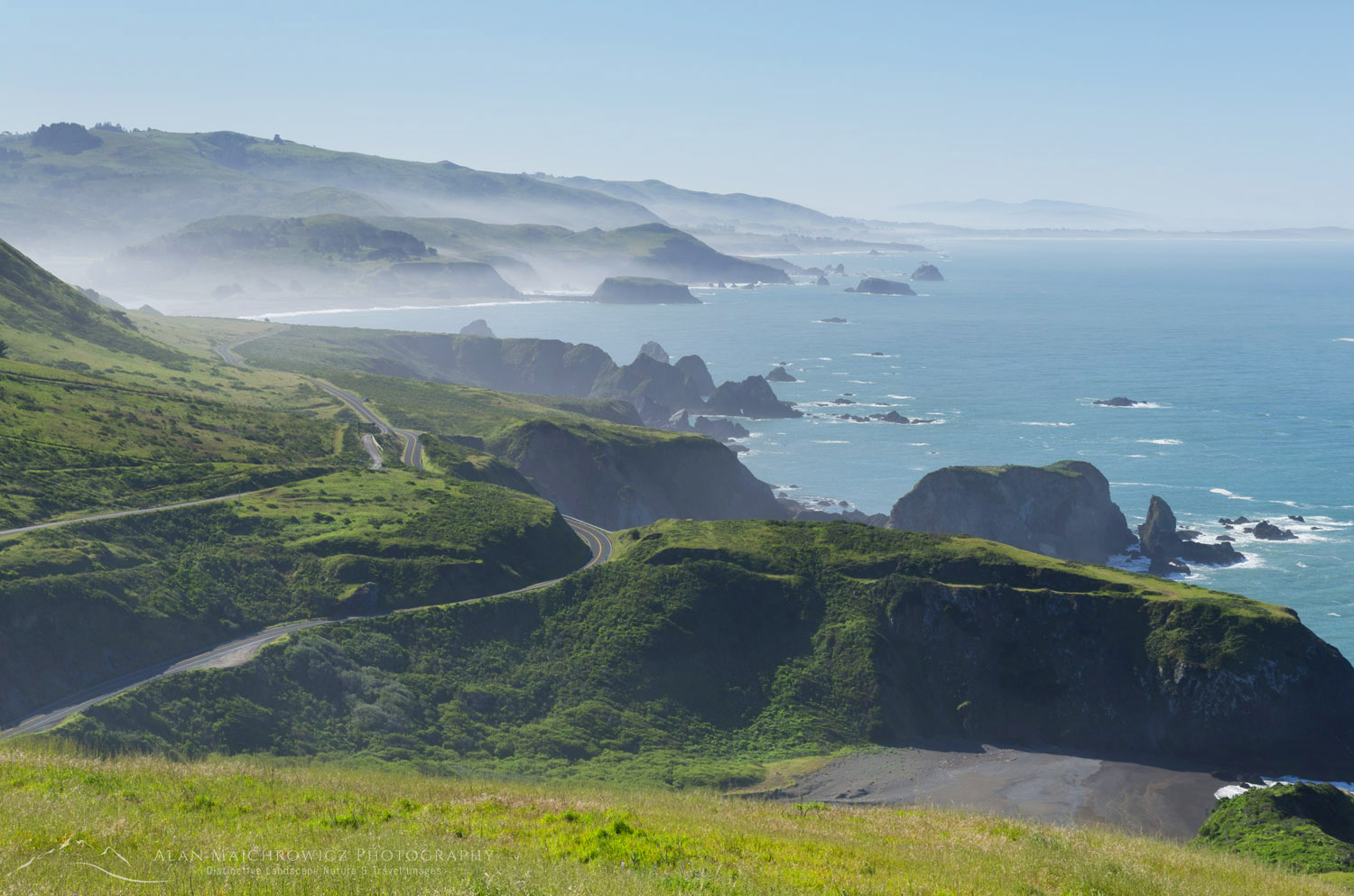 Aside from the beaches and wonderful restaurants Sonoma Coast is a great location for watching migrating whales. While admiring the view from a bluff a local man pointed out to me a group making their way north. They were a fair distance off and hard to see even with binoculars. I had never seen whales, despite living many years in proximity to the coast, so this was pretty exciting. Goat Rock to the north has some of the most dramatic scenery, and is a bit of an oddity. This headland was quarried back in the 1920’s to provide building material for burgeoning San Francisco. As a result Goat Rock in its present state looks more like a detached sea stack. 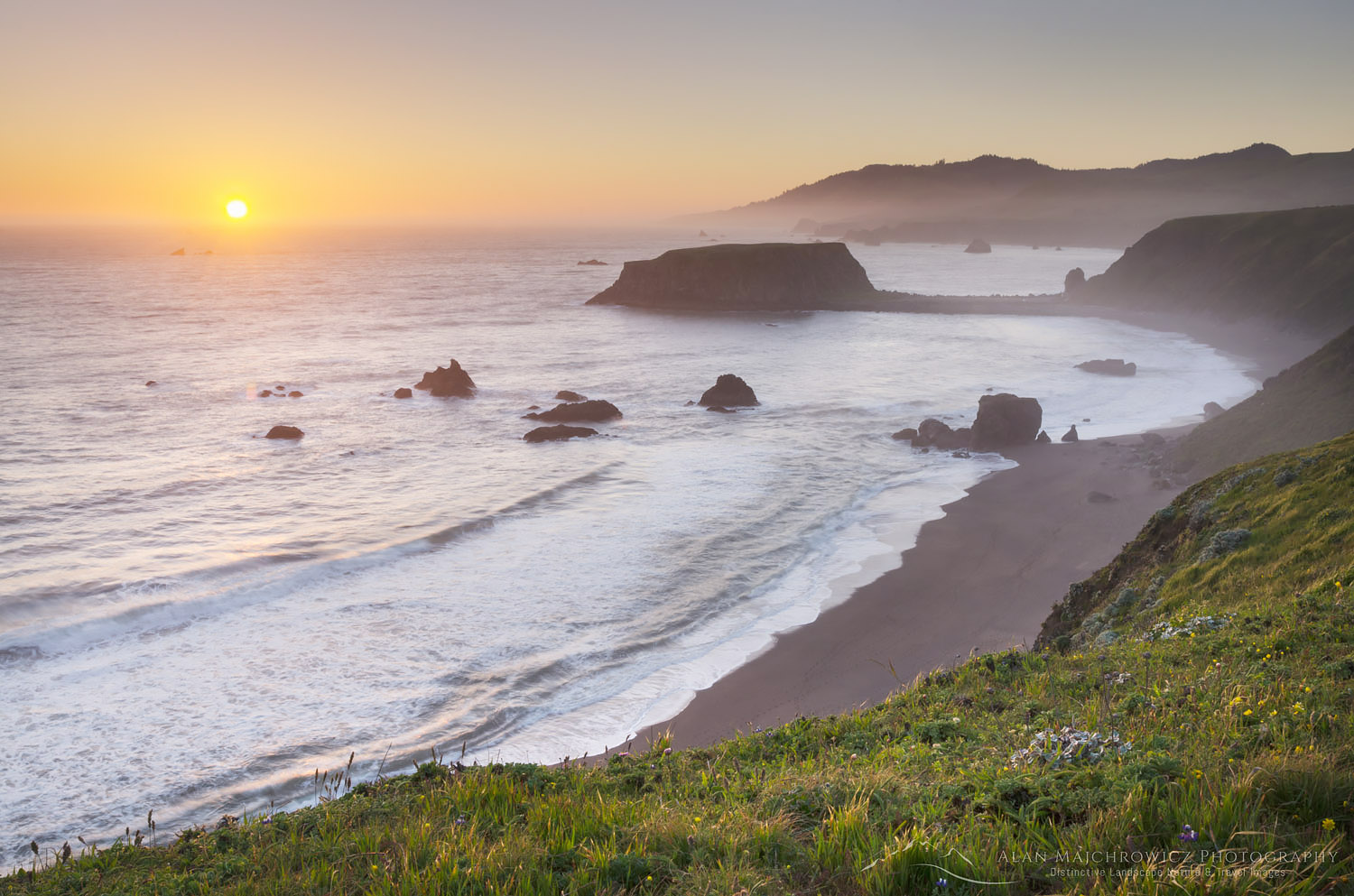 If you decide to visit this wonderful area I have a couple of essential tips. Make sure you book accommodations well in advance. I arrived on a weekday in the shoulder season and was only able to gain the last campsite by arriving early in the morning. Make sure you have enough time for leisurely exploring the area. At least three days, and preferably a week, would be best to see and photograph the sites. Lodging and food can be fairly pricey if, like me, your are from outside the area. State Park campsites all along the California coast start at $30 and can be as high as $50. For these prices there also is no guarantee of full facilities in good working order. Private campgrounds of course will cost more but may be better maintained. 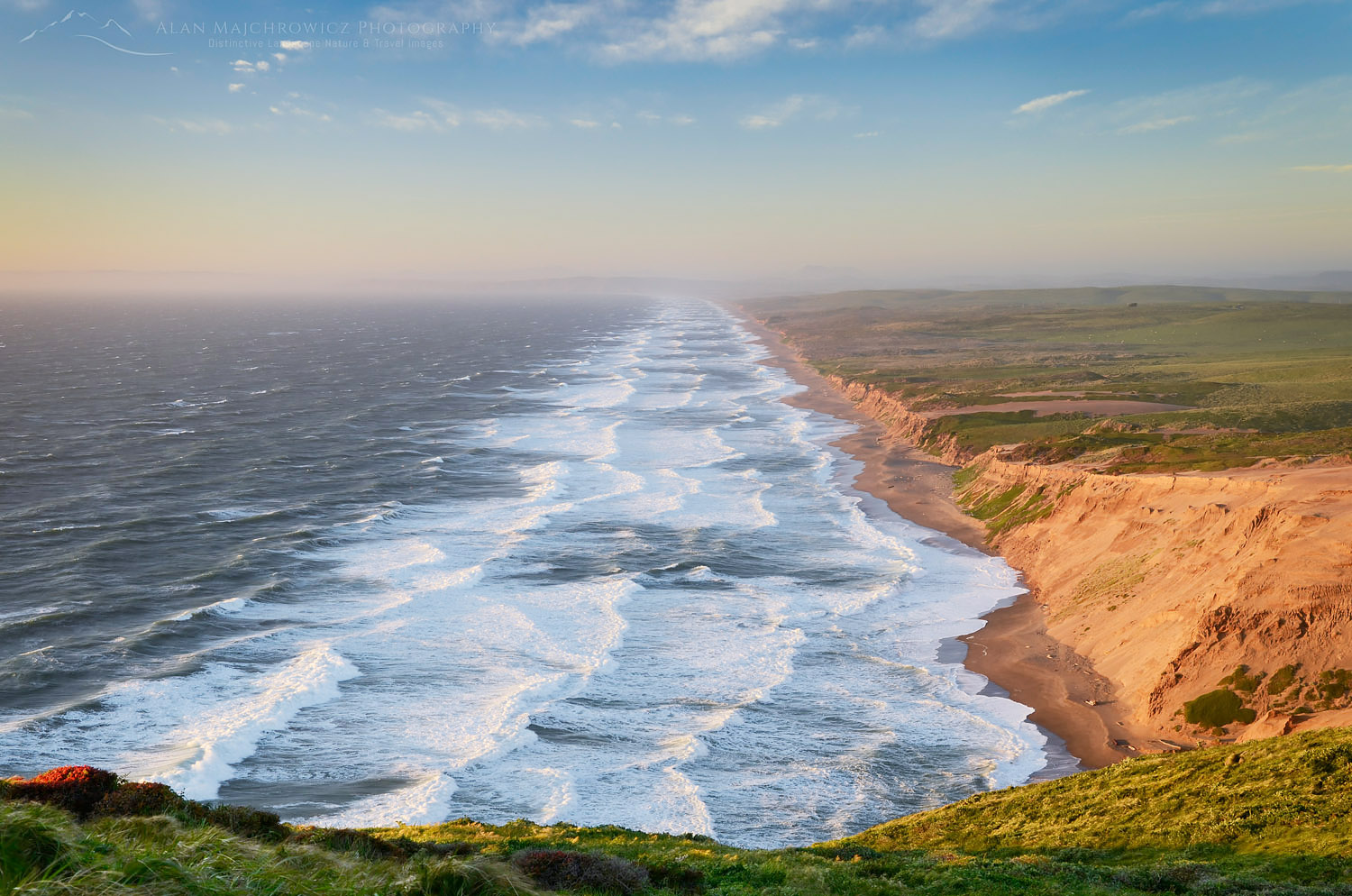 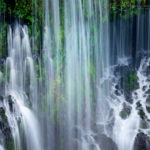 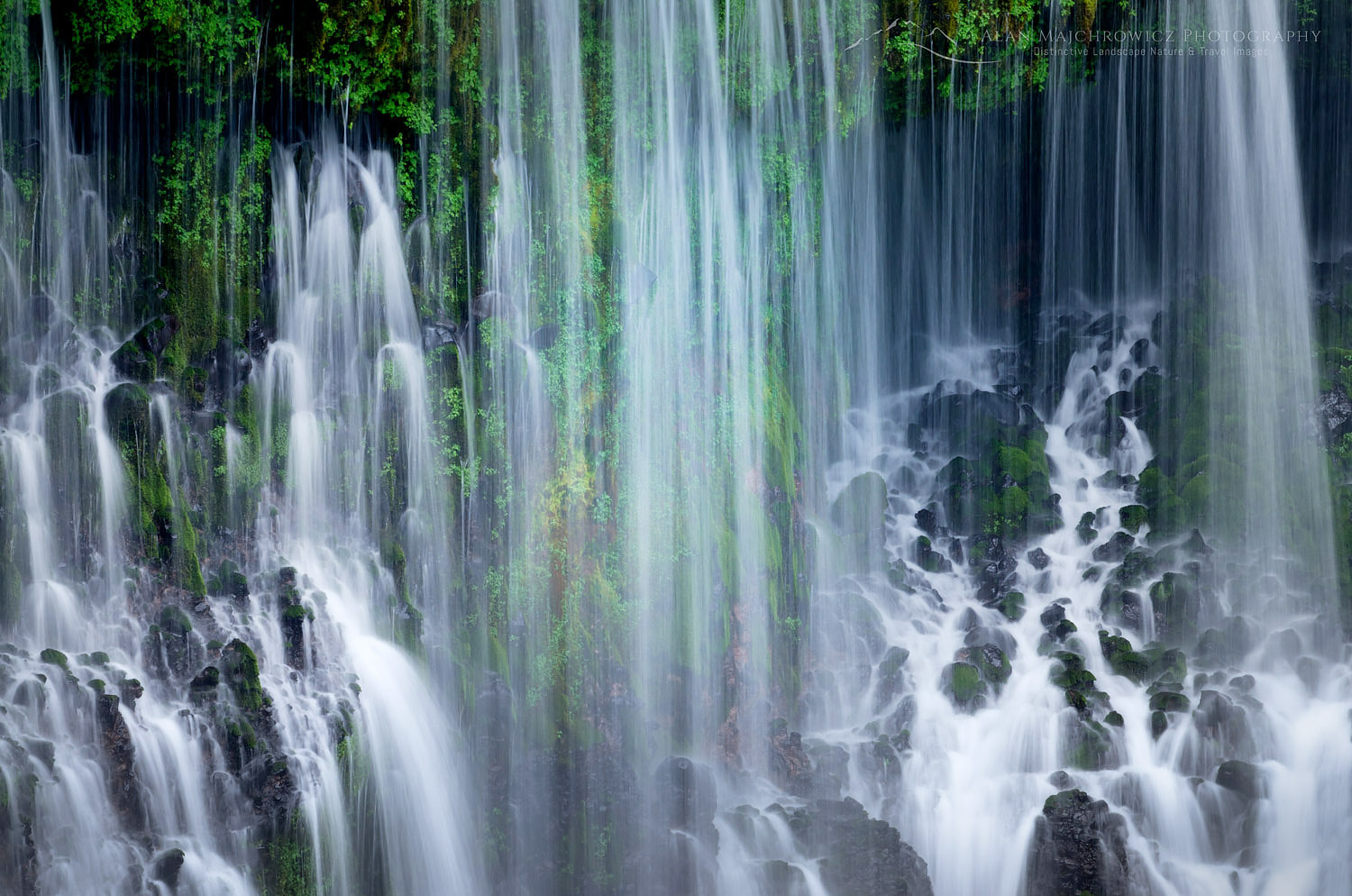 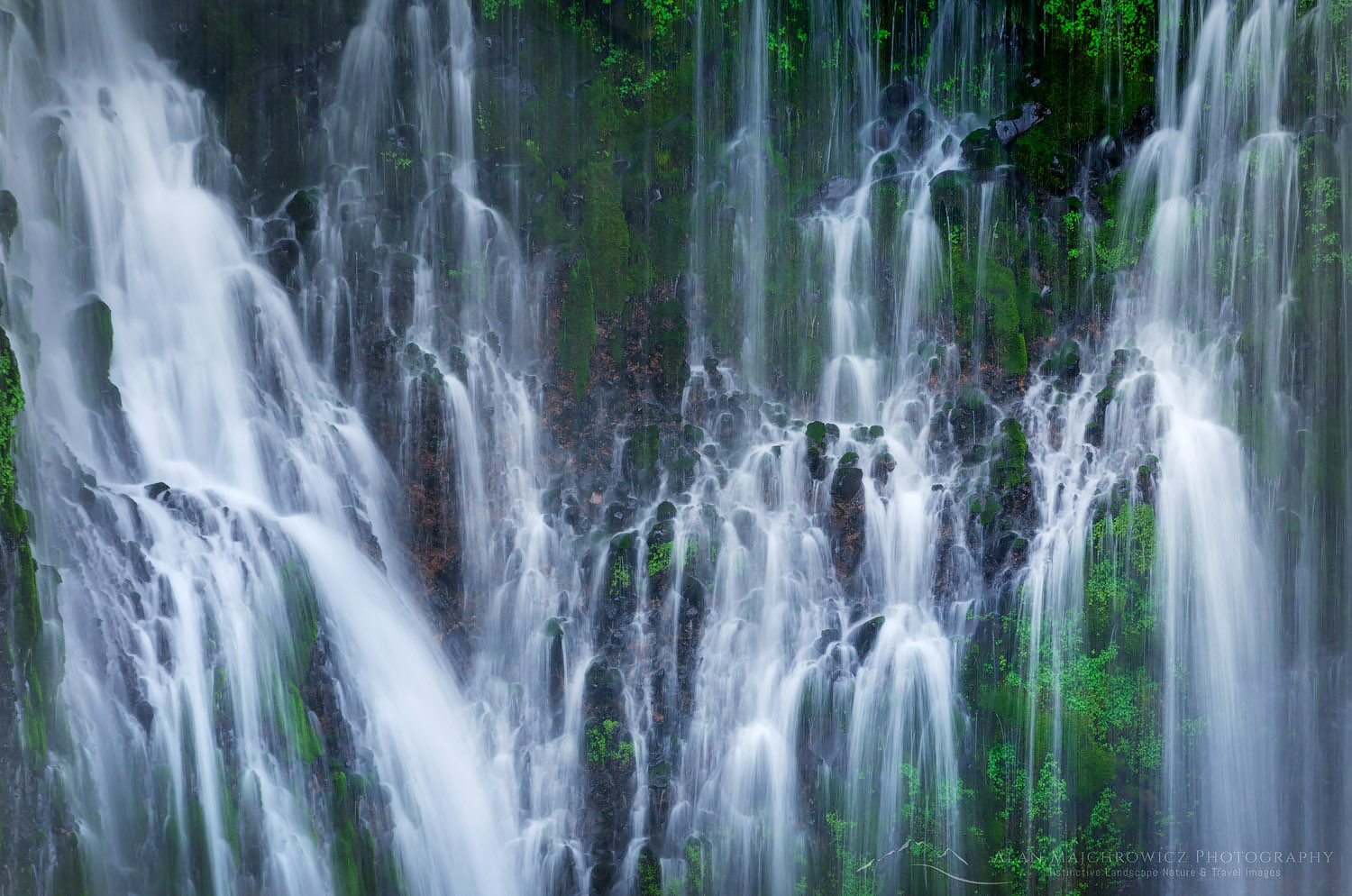 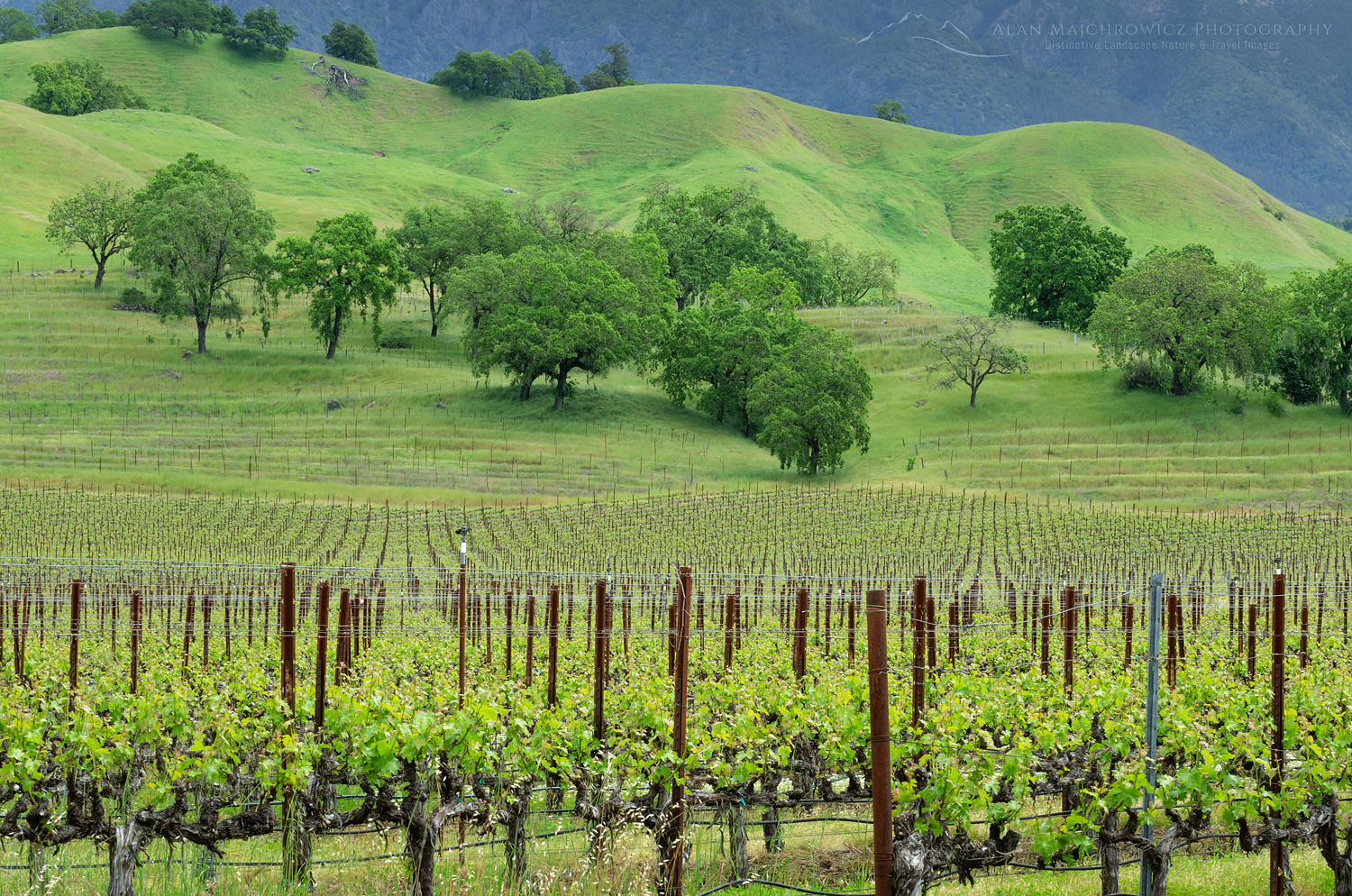 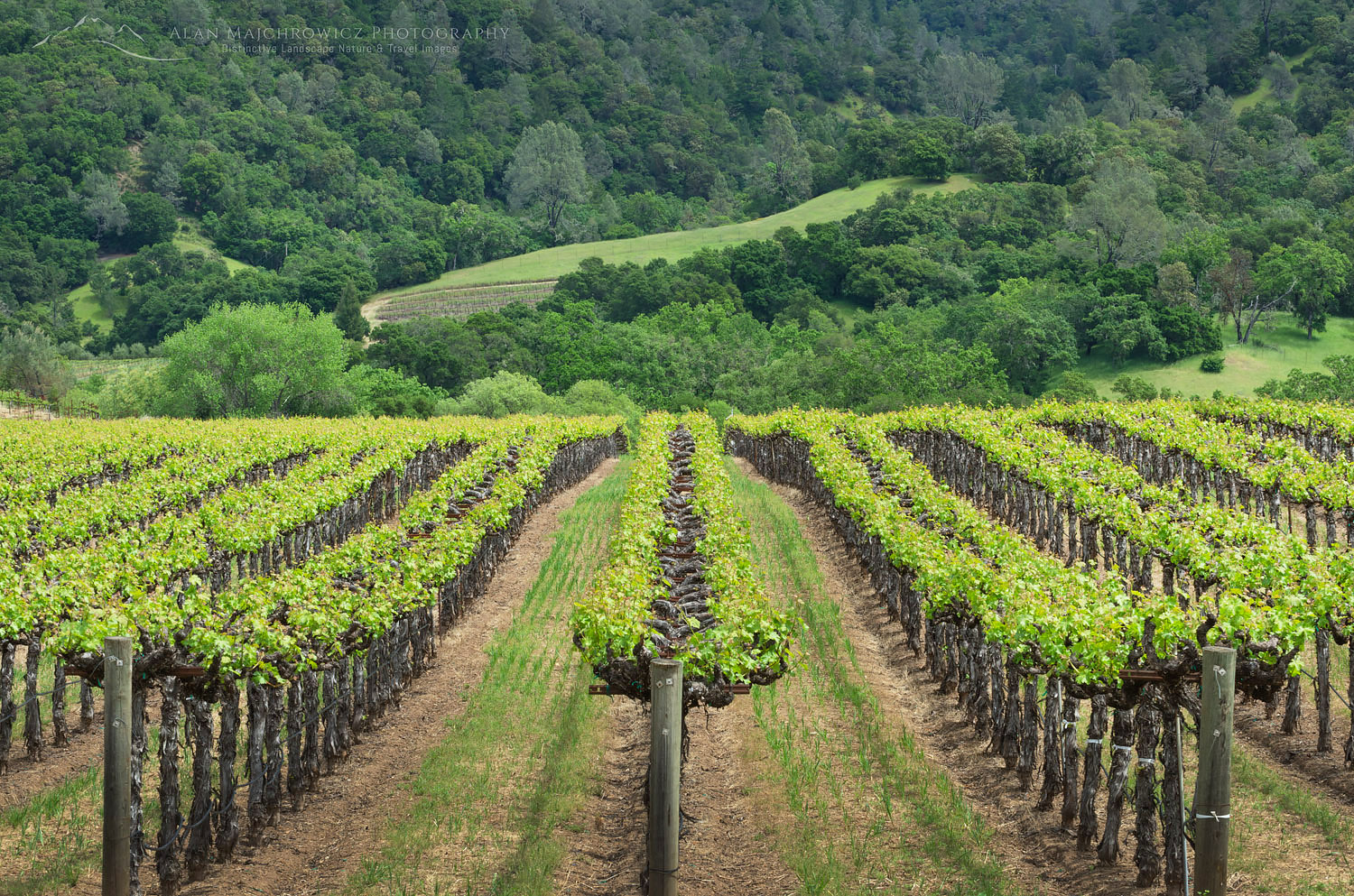 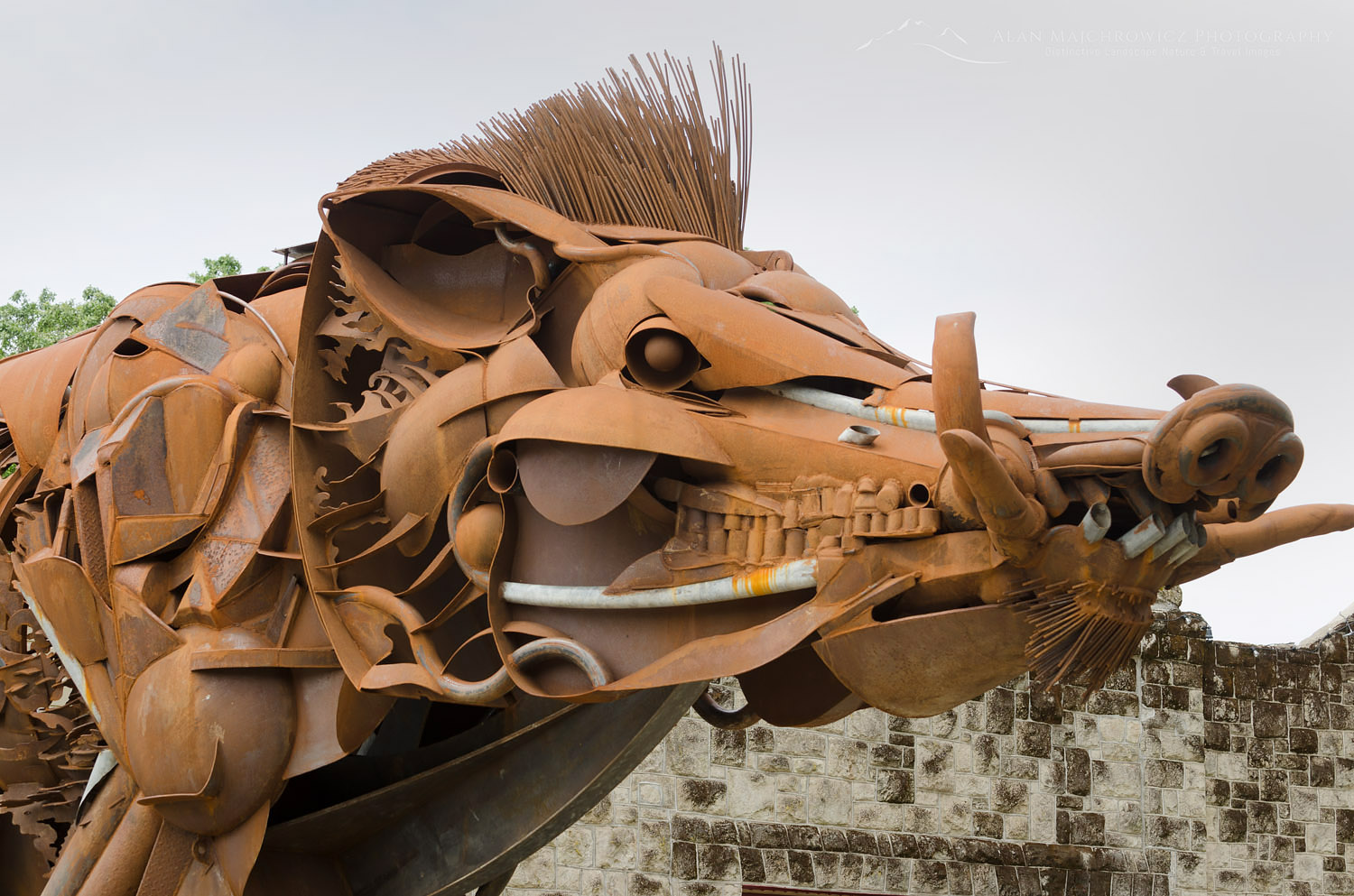 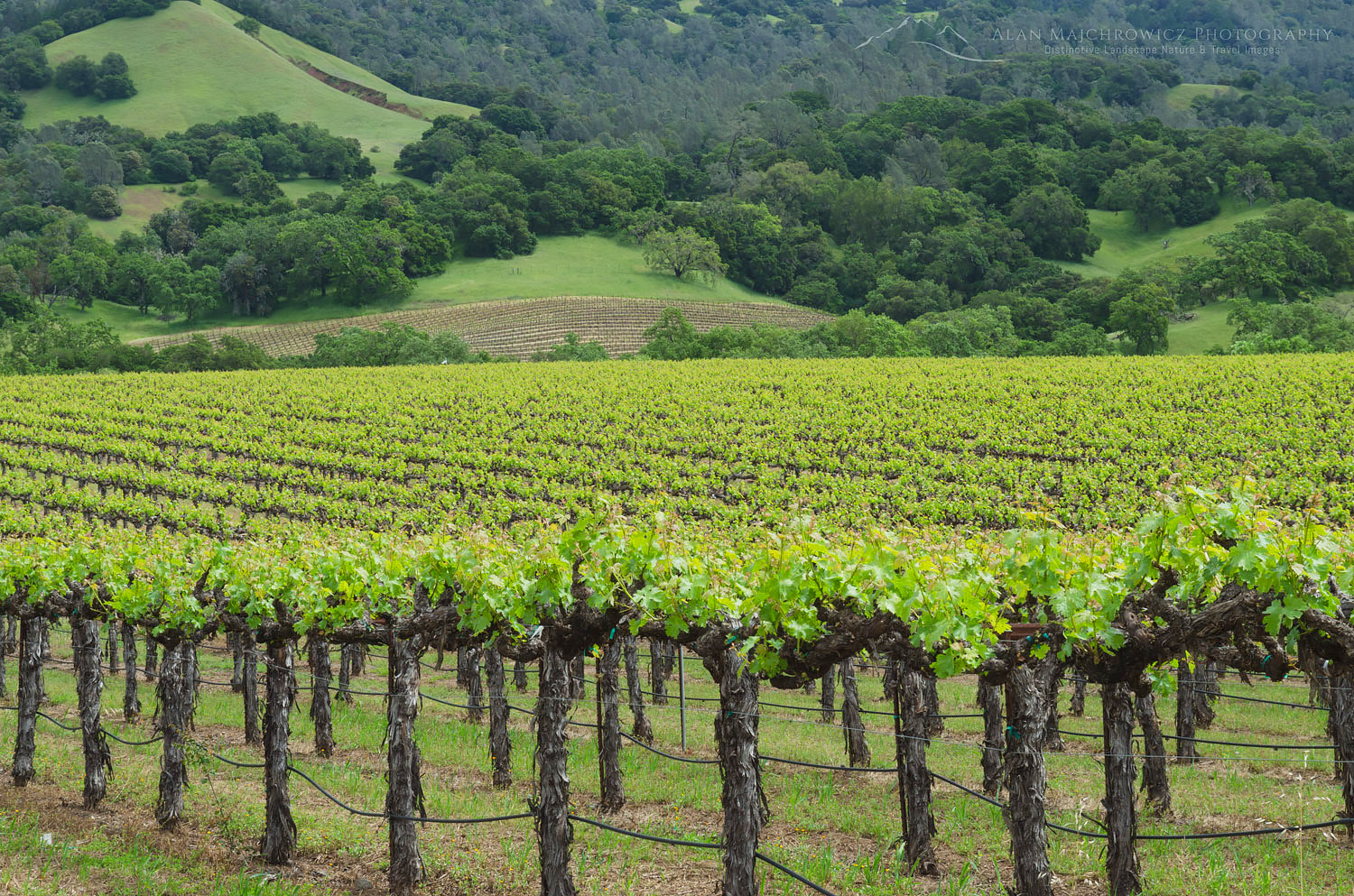 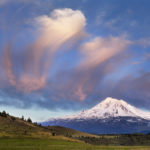 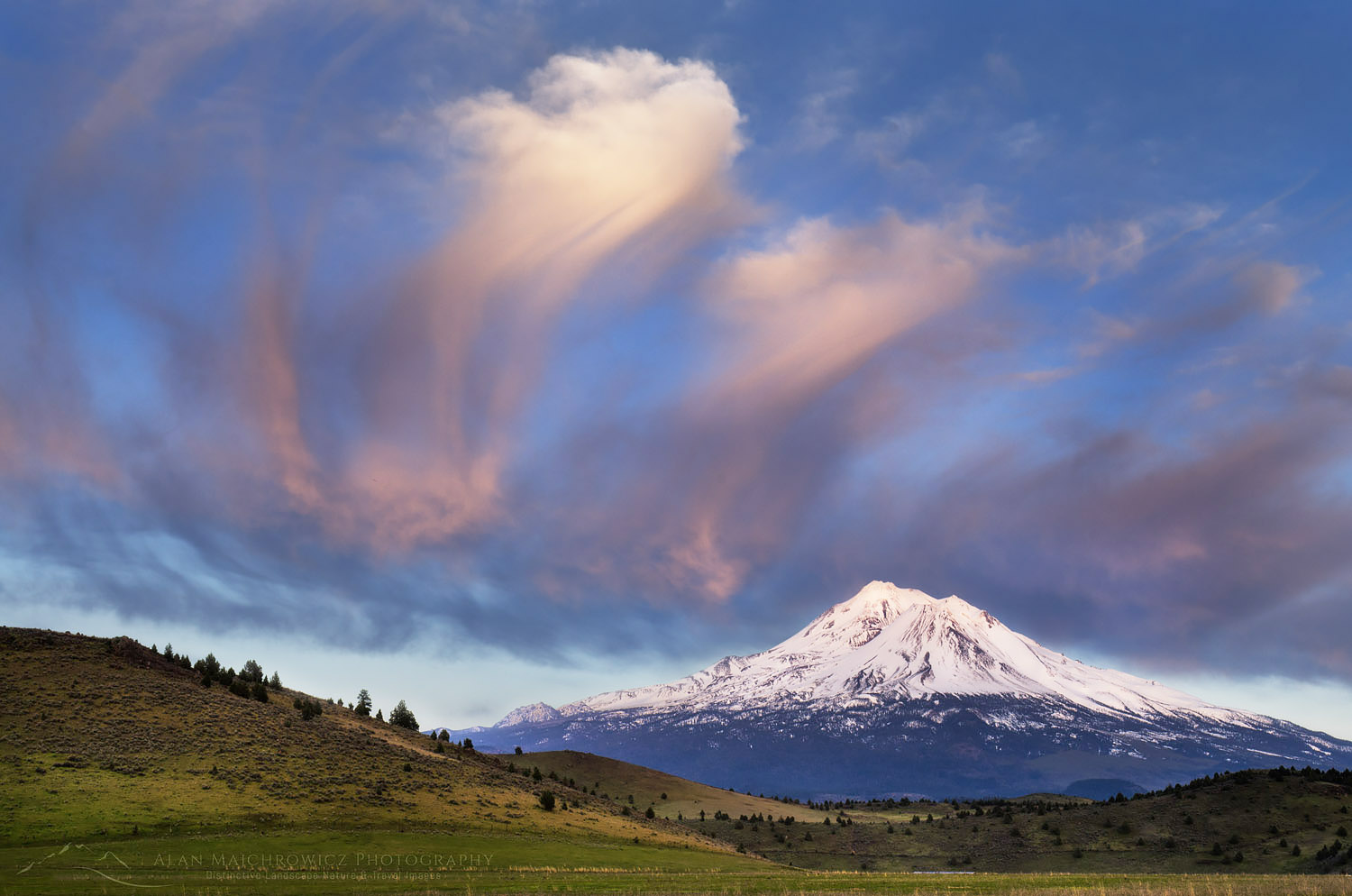 Mt. Shasta is one of the most strikingly beautiful mountains in the Cascades. At 14,179 feet it is the second highest in the range. It is also a sacred mountain of the Klamath tribe. On my way south to the California coast I made a point of setting aside a few days to photograph this beautiful peak. In the image above I was lucky enough to arrive in the area just in time to photograph the mountain while bathed in evening light. The next morning I headed to U.S. Highway 97 for a view of the mountain as a backdrop for the road. Fortunately the morning fog lifted just long enough to make this compressed view image. 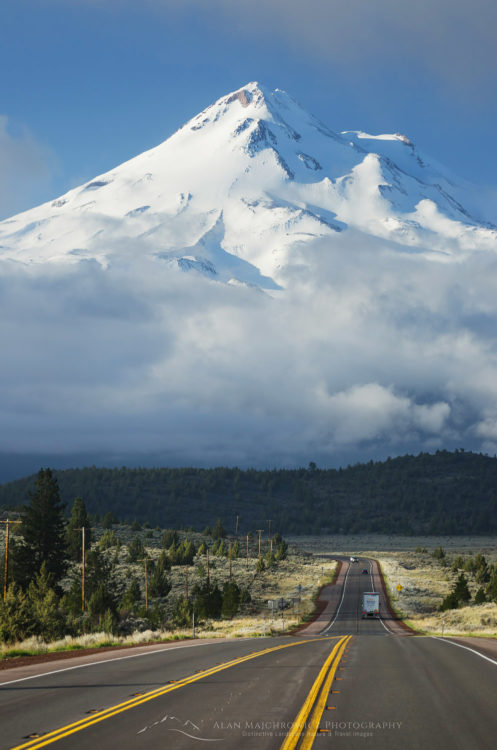 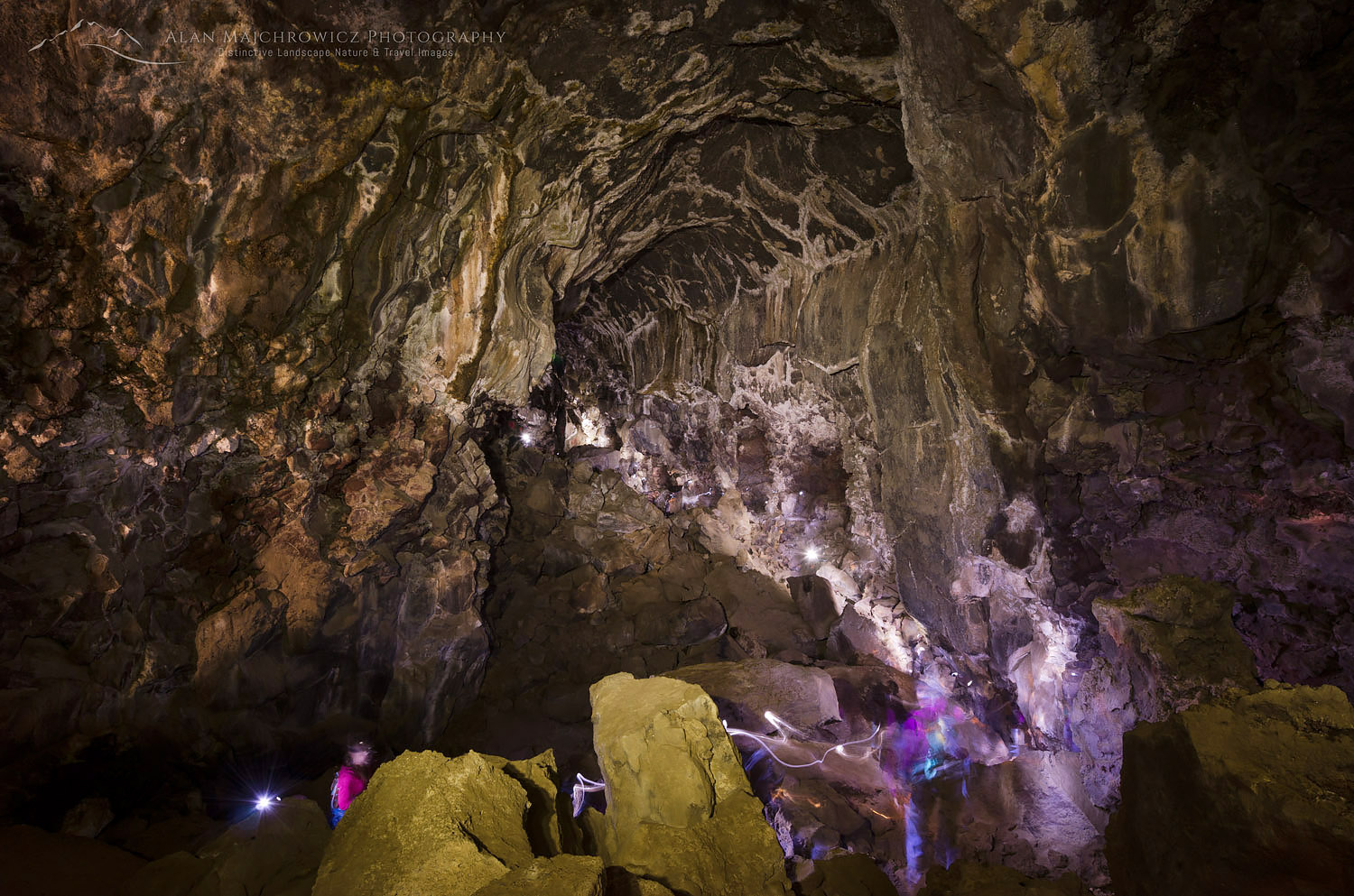 As an enthusiast of all types of caves I was thrilled to learn about and visit Pluto’s cave while photographing in the Mount Shasta area. This cave is really just a large Lava tube created by a past eruption of Mount Shasta.

While checking out the main chamber a group of people passed by to explore the further reaches of the cave. I quickly set up my camera in hopes of making an interesting image. Having no idea how long of an exposure it would take so I just took a guess by leaving the shutter open for 7.5 minutes. I also used my headlamp to “paint” light on the ceiling and walls.

The coolest thing about this image is that the group of people were there to meditate. On finding suitable spots they turned off their headlamps and the leader began singing Native America chants in total darkness. A wonderful experience I’ll never forget. 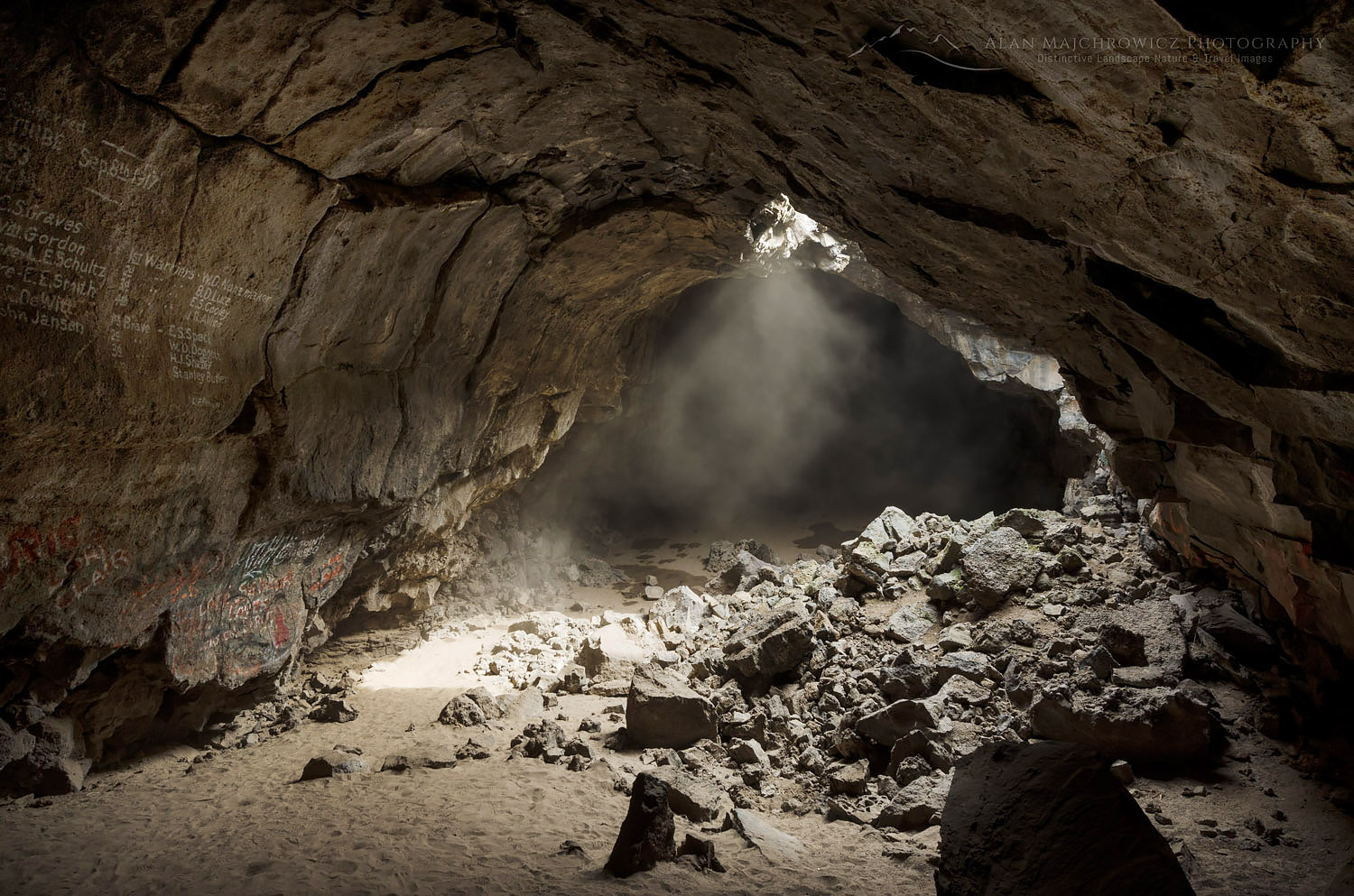 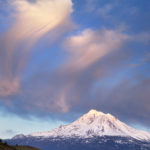 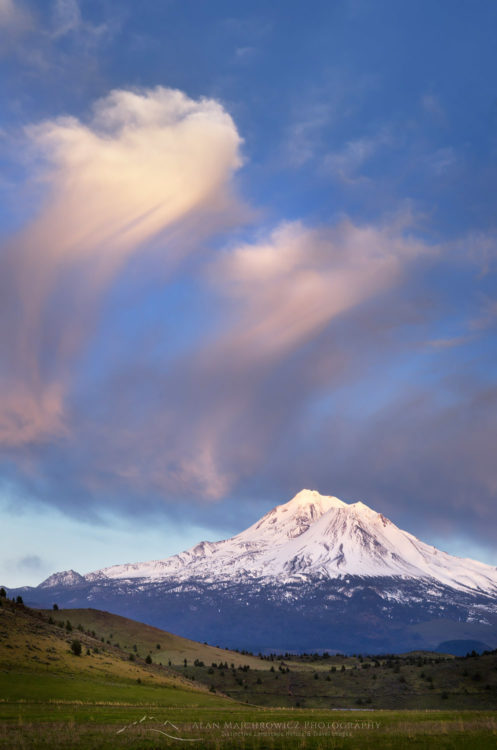 I’m still working on the long process of editing all the new images from my recent trip to California and Oregon. However, there are some obvious highlights I’m anxious to share, this photo of Mount Shasta being one of them.

Making this photo was one of those lucky close calls. After driving south all day from Hood River Oregon I noticed some interesting clouds developing as I approached the California state line. Nearing the town of Weed CA it became apparent there was going to be some good light over Mount Shasta. However I was still miles away and not familiar with the area. Taking a clue from my trusty guidebook, Photographing Northern California by Gary Crabbe, I sped down a nearby ranch road and managed to set up my tripod just in time to make several exposures.

I’m pretty happy with the results, but further scouting the next day revealed an even better composition just a mile further down the same road. There was even an exit on I-5 that could have gotten me there faster. Oh well, there’s always a next time. 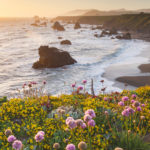 I’m back in the office today after five weeks on the road in Oregon and Northern California. Tons of work to catch up on plus a huge editing/processing project to begin.

Since while on the road I only posted a few quick iPhone pics I felt I should select and share one of the highlights from the main group of files. This photo is from the Sonoma Coast California, just north of Bodega Bay. I’ll add more as they come available, and of course I’ll be working on a trip summary to post soon. Stay tuned!